This page features all the stories in the Harborview Immortals series that can be purchased or downloaded for free. 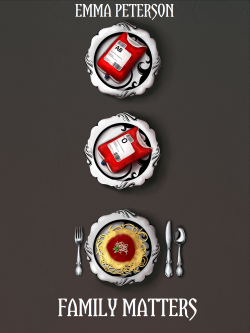 Jacob and Dominic are the parents of a young man named Xan. And really, they’re just like any other parents… except they happen to be vampires.

Despite their present-day prominence, the couple has had to endure numerous challenges over the centuries, from plagues to wars to slavery—Jacob even has the scars to prove it. But their biggest challenge of all is giving Xan room to grow while protecting him from the dangers of the vampire world, dangers that are further heightened when Dominic’s estranged maker comes to town and expresses an interest in meeting his “grandson.”

As for the geeky and free-spirited Xan, he only has one thing on his mind: getting laid. But when he meets a vampire fledgling named Michael, he soon learns that there is more to life, even a human one, than screwing every guy he meets.

Book #1 in the Harborview Immortals series. Contains some adult content.

Xan and Michael go to Dominic and Jacob’s house for the weekly family gathering. After everyone else leaves, they decide to stick around for tiramisu, Transformers, and some rather enjoyable quality time.

This short story takes place a few weeks after the end of Family Matters. It contains some silliness, some sweetness, and explicit adult content.

Xan Dawson is finally growing up. Oh, he still loves his video games and comic books, but gone are the days when he would skip work for long stretches of time and screw as many guys as humanly possible. Two reasons for his newfound maturity are a new boyfriend and almost being killed by his vampire father’s maker. Although the latter has recently made the simple act of sleeping a frightening ordeal, he is determined to press forward and make his parents proud by excelling in the responsibilities of his new job. One of those responsibilities is welcoming an acquaintance to the Rising Sun for the weekend. All goes well after some initial flirtatious awkwardness… until the vampire makes a revelation that forces Xan to confront the pros and cons of a life choice that he would rather not contemplate at all.

This is Book #2 in the Harborview Immortals series. Contains mild adult content.

The Extra stories take place at various points in the past and can be read in any order.

Vampires Dominic and Jacob have been together for almost two hundred years. Despite the pain of their respective pasts, they now have tremendous wealth, power, and—most importantly—each other. However, thanks to a new business opportunity (and an impromptu quest for flavored lube), they’re about to discover the one thing that they’ve been missing in their long lives: fatherhood.

Ah, Christmas Eve. For Jacob, it’s a time for enjoying the presence of his family and friends, making sure that Dominic doesn’t kill his twin brother, and silently hoping that his fourteen-year-old son doesn’t get a thousand tattoos when he grows up because apparently that’s the plan. But hey, at least there are gifts.

Gift-giving isn’t easy when two vampires with a lot of centuries between them have just about everything they could ever possibly need or want. But this year, Jacob has found the perfect gift for Dominic, one that will change both their lives, and he can’t wait to give it to him.

Xan Dawson is used to getting what he wants, and what he desperately wants right now is to attend the party of the year. Unfortunately, that party will be filled with drugs and alcohol and all sorts of other things that no sixteen-year-old should be doing. When his vampire fathers tell him no—a word he doesn’t hear from them very often—he temporarily succumbs to his inner brat and reacts in a way that he can never take back. The best he can hope for is that he will be forgiven.

It’s summertime in Harborview and seventeen-year-old Xan Dawson plans to spend most of it creating memories with a very special friend. This short story takes place one year after Like Fathers, Like Son and contains mild adult content.

Jacob returns to Georgia when a distant relative is in peril. Between seeing her and his first love/murderer/maker, he finds himself remembering all the heartaches and horrors of a human life that he would much rather forget.