I sat down at 1am to play a “little bit” of Diablo 3 and now it’s almost 9am. Sounds about right.

I was looking at Facebook about a week ago and came across the image presently being used in my header, the one that will also be used for the cover of Last Summer. At first I pulled a total Urkel and thought to myself, “Did I do that?” before realizing that no, I did not do that. The image was being used for an article about something, I don’t remember. Seeing that made me really glad that I opted to commission G to do something original for the main stories. Well, original in that I know no one else will have my cover. The cover for Family Matters was a decision made mostly out of necessity as there was no single stock image anywhere that really conveyed the heart of the story. I looked. For a very long time. While I originally wanted to do a “standard” M/M cover, I quickly discovered that there was nothing out there that came remotely close to representing four main characters of three different races. But I’m glad it all worked out the way it did because I love the end result. 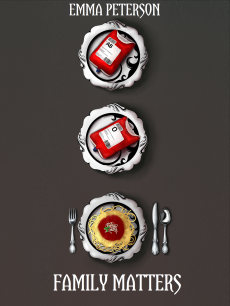 (In case you’re wondering, yes the original font was changed.)

Two pretty awesome bits of news before I go. The Rising Son will be finished this weekend. Woo-hoo! This is presuming that D3 doesn’t suck me in again. I’ll try to resist the urge. Lastly, out of curiosity I did the math and discovered that Family Matters has been downloaded an average of five times a day since it was published. For having done absolutely jack squat in the way of advertising, I’m really happy about that. I know it’s probably because the book is free and free is a great price, but I’m still counting it as a win. 😀

All right, bedtime. Have a nice weekend!

Hi guys! The cover for A Halloween Interlude should be finished sometime this weekend. Once I get the finished product, the story will be published right away on Smashwords. Thanks again to the awesome G. Raven for doing another cover for me (and hopefully more covers down the road if I make with the puppy dog eyes).

Speaking of awesome people doing awesome things for me, I also want to give a shout-out to Jenny Cotton for this:

This is the result of one of the original ideas I had for the Family Matters cover, before I opted to go with something simpler. So instead I decided to turn this idea into a bookmark advertising the Harborview Immortals series. I just placed my order and should receive them by the end of the month. If you want one, shoot me an email (emmapetersonwrites@gmail.com) or private message through FB or Twitter and I’ll be more than happy to send you one or two or whatever, wherever you are and at no cost to you. (FYI, I won’t be able to mail anything until after April 8 because I will be in Florida for two weeks. By the way, I’m going to Florida for two weeks.)

That’s all for now because Diablo 3 is calling and I must answer. Have a great morning/afternoon/evening/night!

I’m doing this a day early because Thursday is Christmas Eve and, in keeping with tradition, my husband and I will spend all day frantically shopping for gifts at the last minute and then taking all night to wrap them. Fun times!

One month ago—after years of manga setbacks—I took the plunge and publicly shared a novel that was very near and dear to me, along with two additional short stories afterwards. I was nervous as hell about it, too, and I’m usually not the nervous type. Although I didn’t put much effort into advertising any of it outside of my own little social media circle and posting them on a few fiction sites, the stories have averaged ten downloads a day since November 21. Presuming that this is not due to a handful of very devoted friends who downloaded them on 300 different computers and devices, I’m pretty damn proud of that. Thank you for taking the time to get to know my diverse little vampire/human family. There are a lot of stories in this series still yet to be told, and I hope you will continue to enjoy reading them as much as I will continue to enjoy writing them.

A family moment from the past. Drawn by G. Raven, who also did the art being used in my current header.

My second-to-last manga partner was an insanely talented girl, the only female partner I’ve ever had, as a matter of fact. (We even joked about calling ourselves CRAMP; if you’re a manga fan, you’ll understand why that’s funny.) One of the things I enjoyed most about working with her was that she challenged me to step outside of my box and write stories I never thought I would have an interest in writing. As someone who has a preference for darker stories, I didn’t think I had it in me to write something that didn’t involve the supernatural or at least one violent act. But because Nan was all about sweet and fluffy slice-of-life type stories, I agreed to write something that was more up her alley than my usual stuff. And that’s how Suspect was born. Well, that and a sadly short-lived BL magazine that went under before the series was able to be published in its entirety. In a nutshell, the story is about a college guy who is trying to determine the identity of the secret admirer who keeps leaving him roses and eye-gougingly sappy poetry and messages. While that’s going on, he’s also finding himself reluctantly attracted to the jock he’s been asked to tutor.

Not gonna lie—I threw up in my mouth back when I first started writing this, lol. But by the time the story came to an end, I was very happy with what we had created.

Below are some pre-lettered submission pages we did for BL Twist. Some of you who follow me on LiveJournal may remember seeing the final product years ago. They’re buried somewhere in my non-Emma Photobucket account now; one of these days I’ll dig them up and post them here.
END_OF_DOCUMENT_TOKEN_TO_BE_REPLACED

I’m a huge fan of yuri manga. The problem I always had, though—aside from the tragic overall lack of it in general compared to yaoi manga—was that a number of the stories I came across never really appealed to me. Not that there was anything wrong with them, it’s just that I’ve always been more drawn to dark and/or violent stories, and there wasn’t an overabundance of that in the girl/girl stuff I found. So I decided to write something for myself. And that’s how Kira Fujiwara was born.

Kira is (was) a killer. She never took any particular joy in it; it was her job, and she did it. Very well. But that’s not to say that she didn’t have a soft spot. She did, in the form of her on-again, off-again girlfriend, Jade, who understandably had some issues with being in a relationship with an assassin. I hate that I was never able to make a go of the story I wrote for them aside from the stuff that’s sitting on my hard drive and a short story that was published in the last printed volume of Yuri Monogatari, but maybe one of these days I’ll dust her off and try again. I just can’t resist a pretty lady with a big gun and an even bigger attitude. 🙂

I’m pretty sure at some point in the past—perhaps on the other blog for those of you who followed me here—I mentioned that Family Matters and, by extension, the entire Harborview Immortals series was originally written as a manga. (And if I didn’t mention it, well, now you know. 😀 ) The whole family angle was actually a very small part of the overall story, which was more focused on the interaction between a number of clans spread out across the globe: Spain, Ireland, Britain, Japan, and Italy. The story was told primarily from the Italian clan’s POV, with a little bit of input from the Irish. Jacob didn’t exist here; he’s actually a carryover from an even older story that I wrote about sixteen years ago, though I did snag his present name from another character, Giacobbe, who didn’t make the cut here. The character who became Xan was originally named Niccolo and of Italian and Japanese descent (some of you can guess where the Japanese portion of him ended up). He was also a vampire; the whole human thing was reserved for another. Let’s see, what else… Vincenzo was nice, Demetrio was not, and Luca was a ruthless and slightly rapey enforcer-type. Yikes.

Despite my initial disappointment that the manga never failed to materialize outside of some drawings and pages that will probably never see the light of day, I’m really happy with what the story became and where it will go from here. It took a while to get from there to here, but in the end, it was totally worth the frustration. I hope you’ll agree.

What could have been:  END_OF_DOCUMENT_TOKEN_TO_BE_REPLACED